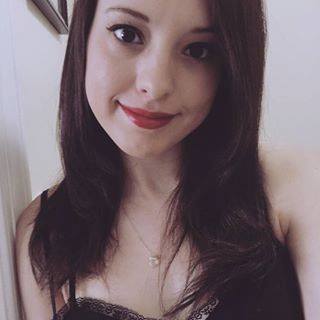 Kailey Tedesco is the author of She Used to be on a Milk Carton (April Gloaming Publishing) and These Ghosts of Mine, Siamese (Dancing Girl Press). She is the editor-in-chief of Rag Queen Periodical and an associate editor for Luna Luna Magazine. She also performs with the Poetry Brothel. Her work can be found in Grimoire, Phoebe Journal, American Chordata, and more. For other information, please visit kaileytedesco.com

1. Much of your work tends to have an otherworldly quality to it, as if you intentionally reach beyond the ordinary when you write. Where do you draw your biggest inspiration from?

Yes, I’m definitely preoccupied with all that is otherworldly and phantasmagorical. I get most inspired by images that I have difficulty explaining, but can easily understand. Films like The Neon Demon, Mood Indigo, The Haunting of Hell House, Picnic at Hanging Rock, anything David Lynch, etc. can inspire me for days — they are just so rich in their visual sense of self. I hope to achieve a similar sense with my poems.

I’m also inspired by other worlds in general. When I was young, my grandma had this huge mirror that she kept on a slant in her kitchen. I used to just sit in front of it, staring at the way it looked like if I leaned forward I’d fall forever into what was behind me. That sensation thrilled me, even when I knew it wasn’t possible to just tumble through mirrors. I still like to think about all of these multiple realms interacting with one another, and that’s largely what my first collection, She Used to be on a Milk Carton, is about — a girl moving through realms of trauma, girlhood, death, the afterlife, and hauntings.

2. Did growing up in the Pine Barrens of New Jersey influence your story telling abilities? Do you have any interesting stories from your childhood there?

Yes, for sure! My parents both love horror and the macabre, so scary stories and movies were a huge part of my childhood. We used to camp just down the road from the Leeds’ house where the Jersey Devil was born. When I was six my dad took me and my uncle (who was also really young) for a walk in the woods at night and told us about Bloody Mary for the first time. I was terrified and ran all the way back to my grandparent’s camper by myself. But afterwards, I basically recounted the story at every sleepover I ever attended.

Once, I got in trouble with my Girl Scout leader because I made up my own story about a doll that comes to life and cuts off people’s fingers. I got pulled aside for a long time, and the GS leader just sort of told me how inappropriate that was. Making up spooky stories was so encouraged in my house though, so I was just like umm… okay.

My mom always said that there were too many real life things to be afraid of, so there was no use worrying about dolls coming to life and cutting off fingers or the Jersey Devil coming to spoil our milk. I like to explore this idea in my writing too — how the fantastical or supernatural can act as a mollifier for “real” horror.

3. You have an impressive editing background. As an editor and publisher, what do you most look for in submissions, and what defines, for you, a poem that demands attention?

Thank you! At Rag Queen Periodical, our goal is to publish work that is well-crafted, but also work that advocates for bettering the world or the self in a way that is truthful and real. We’ve published gorgeous pieces about motherhood, compassion for animals, mental illness, addiction, identity… it goes on. I definitely seek work that can speak on many levels.

My most enthusiastic YESes always go to pieces that create some sort of unfamiliar world, either with images or language. As a reader, I like feeling a little displaced at first, but propelled by the quest to orient myself within the experience and language of the poem.

4. Tell me about the Poetry Brothel in New York City, where you have a recurring character. How do they present their performances, and does your work there inform how you perform at other readings?

The Poetry Brothel is a really unique and awesome organization. I perform as Hortensia Celeste, a cursed soothsayer. The whole experience breaks down a lot of barriers, and brings poetry to both literary and non-literary communities in an almost sneaky way. People enjoy themselves so much, I think they forget the stigmas that can sometimes surround poetry readings.

Basically, an audience comes into a whole new world, listens to talented poets read their own work as a character on stage, and then they can pay a token or two to hear their favorite characters read to them privately. There’s a ton of other happenings throughout the night like burlesque dancing, tarot readings, and a lot more. It’s really just this big, wild circus of a time.

I was still fairly new to reading out loud in general when I did my first Brothel event a few years ago, but I loved the idea performing in character. I did fine my first time on stage, but I stammered my way through my first few private readings. I remember people politely asking me to read louder, but I was just feeling so shy and awkward. My most memorable reading that day and maybe ever was with a woman from Europe. While I was reading, she started to cry and then she just hugged me so tight. We had a really long and personal conversation afterwards about my poetry, and she gave me her home phone number. She told me to visit her if I ever found myself in Sweden. I realized the magic of the Brothel then— connecting with strangers through words! I do my best to channel that vulnerability and intimacy in my non-Brothel readings now.

5. You put out a chapbook with Kristy Bowen’s wonderful Dancing Girl Press. How was that experience? You also have just published your first full length collection. How intense was the process for choosing what you wanted to represent your work as a whole?

Dancing Girl Press is fantastic. I’m so inspired by Kristy’s creative energy, and how well she is able to grasp the heart of each collection when she designs the covers.

My first full-length collection took about three years to complete, and a lot of that time was just editing. I’ve known the world, or worlds, that I’ve wanted to build for years, so my vision was there long before I started to write. It was mostly a matter of figuring out how to best communicate that vision, and there was a lot of trial and error in that process. I have a very early draft of She Used to be on a Milk Carton saved on my computer, and it is just so completely different than the book that’s out now. I had a bit of a poetic growth spurt while writing this manuscript where I began to discover the moves that worked for me, and stopped trying to push the rest. There were things I was so stubborn about in the first draft, and for a while I didn’t want to accept that they weren’t working. So, finally accepting that some poems needed to go was both the most difficult and most fruitful part of the process. I read the collection over after those cuts and was just like, yes, this feels much better!

I’m also grateful to have had many eyes look over the manuscript at different stages. My professor, Genevieve Betts, read through probably three different versions of the book over a span of just a few months. She really helped me crystallize my intentions, and I’ll always be so thankful for that.

You can find Kailey’s book, “She Used To Be On A Milk Carton” right here.